The hybrid version of the One World festival attracted a record number of viewers all over Slovakia. More than 15,000 viewers, including high-school students, watched the documentaries of the 22nd season. The winning film A New Shift by Jindřich Andrš will also be part of the One World programme in the regions, for example in Liptovský Mikuláš, Prievidza, Vranov nad Topľou, Humenné, Bánovce nad Bebravou, Ružomberok, Žilina and Trnava.

The award for the best One World film this season was presented by the actors of The Theatre with No Home. During the closing ceremony, they performed a play called Dreams, in which they presented their own dreams and desires.

“We consider this season’s festival a dream come true, which is why we decided to close the event with a theatrical performance about dreams,” said Eva Križková, executive director of the festival. “Unlike last year, we were able to meet our viewers in cinema theatres again, and we also managed to bring it to viewers with hearing and visual impairment, seniors, foreigners, migrants and the homeless. Based on the feedback from our viewers, we know that the challenge contained within the festival’s theme, ‘Let’s keep in touch!’, struck home. Through the film experience, they were able to get in touch not only with distant worlds, but also with new dimensions within themselves or with each other in cinema theatres.”

The winning film is A New Shift

An important part of the festival programme is the Slovakia and Czech Republic for Human Rights documentary film competition. It highlights the best in our region each year and at the same time mirrors current issues resonating in our country. The main prize was awarded to the film A New Shift by Jindřich Andrš. “Nobody gave me a chance to show what I know. I feel like a mole that has been buried underground for 25 years. Now he has come out into the light and been blinded by it. I am starting to look around. It wasn’t even as hard to learn to code as it was to convince recruiters in the job market that I could handle such a change,” says Tomáš Hisem, the film’s protagonist.

The winning film was chosen by an international jury consisting of director Maia Martiniak, international distributor Anja Dziersk from the German company Rise and Shine World Sales and Alaaddin Uslu, a student of the Faculty of Arts of Comenius University, who is intensely interested in intercultural dialogue and a film enthusiast. They praised the “intimate camera work, sensitive direction and honest portrayal of the protagonist. At the same time, we perceive that he trusted the film crew, and allowed us to enter a stage of his life and be a part of it. We feel his frustration, perseverance and ultimately happiness. We believe that his life can be an inspiration to many people of our time who do not have it easy in life, and it gives us strength that change is possible in every minute of our lives.”

According to the jury, “It’s never too late to start over. Sometimes we change our lives on our own, other times life forces us to. And at some point, we may feel like we have no choice. The protagonist of the winning film experiences an unexpected twist in his life and has to choose a completely new path. He fights not only his fate, but also society, which doesn’t give him many chances for a fresh start. In the film, we experience both his successes and his downfalls. And we are inspired by his confidence in the possibility of change. At the end of the film, we feel hopeful and keep our fingers crossed that he, like his favorite football team, will win the game of his life.”

The winner received a plastic sculpture by Slovak sculptor Mária Tóthová and, for the first time, a cash prize worth 2,000 euros. He will also have the opportunity to participate in the Slovak part of the international workshop Dok.Incubator. The Slovakia and Czech Republic for Human Rights documentary film competition was made possible this year by the Embassy of the Kingdom of the Netherlands.

In addition to the main prize, the jury also awarded a special prize to the director of the film Lines, by Barbora Sliepková.

“It is an urban symphony, a composition of poetic images describing urban life, in which you can feel the heaviness of the city contrasting with its rhythm and beauty. The loneliness of the people living in it is enriched with distinctive sound visuals and emotions.” A visual essay about the loneliness of the urban human inspired by Slovak conceptual art and photography had its Slovak premiere at One World. From 11 November, the viewers can see it in Slovak cinemas.

One World was also active in schools

During the festival, six online school screenings and expert discussions took place, with 4,069 students from 99 schools attending. Thanks to the virtual format, 52 towns and villages were involved in watching the school screenings. Students actively participated in the discussions through the interactive online tool Sli.do. Eefje Blankevoort, co-author of Shadow Game, and the protagonist of the film, who goes by the pseudonym SK, also participated in the discussions. Unlike his peers, he is not studying but fleeing from danger in Afghanistan and trying to reach Western Europe.

One World thought of everyone in its programme. While the fully vaccinated could enjoy the atmosphere of the live yet safe screenings, an online alternative was prepared for others. Screenings in Bratislava supplemented by encounters with filmmakers and other special bonuses took place in the cinemas Kino Lumiere, Mladost, the Klap cinema of The Film and Television Faculty of the Academy of Performing Arts, Nova Cvernovka, A4 – Space For Contemporary Culture, and in the Faculty of Arts of Comenius University in Bratislava. One World Films in cooperation with the daFilms.sk platform transferred films to the online space.

One World made its programme available to viewers with hearing and visual impairment in cooperation with Teledata and the Department of Translation Studies, FA, CPU in Nitra. Interpretation of the discussions into sign language was provided by the Deaf Culture Centre Myslim.

The International One World festival is held under the auspices of the President of the Slovak Republic Zuzana Čaputová, the Mayor of Bratislava Matúš Vallo and the European Commission. The event is supported by the Audiovisual Fund. The lead organizer is the non-profit organization Clovek v ohrozeni. The One World without Barriers project is supported by the Bratislava City Foundation. The Department of Translation Studies of Constantine the Philosopher University in Nitra and students of the Faculty of Arts of Comenius University in Bratislava assisted with translation of the festival. Thanks to the company rychlotest-covid.sk, the festival organizers were able to regularly go for PCR tests and in this way also ensure the safety of viewers. 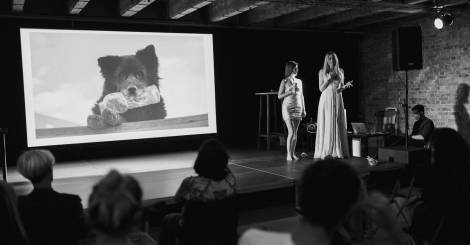 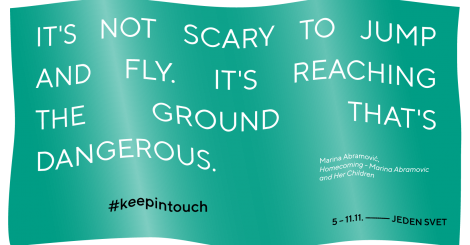